having 3 free PCIe slots inside. From the outside there is no difference, but the host card mounted in the first slot is - of course - a TB to PCIe adapter card. But also the main board has some subtle differences, as TB needs a different power supply, and the chassis has a Thunderbolt-aware automatic on/off feature. Pull the cable or shutdown the computer and the TB chassis enters standby. Nice! 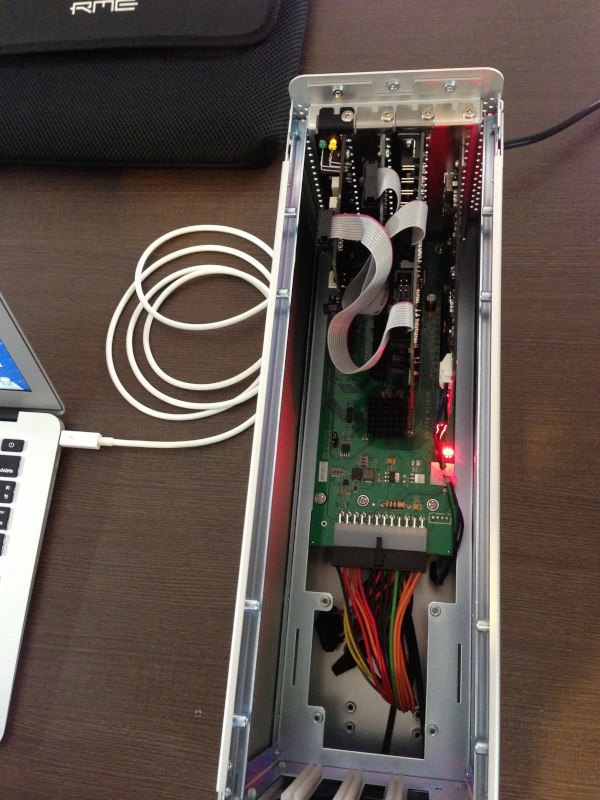 Included is a 2m Thunderbolt cable, a power cable, and a black soft-bag in the chassis size to carry it around. I used this one on my flight from Germany to Thailand to have the whole chassis, with a HDSPe RayDAT plus TCO already mounted, on my shoulder and taking it on-board. Nice again!

Testing the chassis with the latest 13" MacBook Air with fastest CPU and SSD drive gave some amazing results. As expected Plug and Play under Mac OS X works perfectly. The performance of the little MacBook Air is stunning anyway, but it is quite astonishing to see that with this expansion chassis it can easily drive not only a RayDAT, but also a HDSPe MADI FX under full load! Using our own test tool, which generates a test signal on all channels and reads it at the input, I was able to verify stable and click-free operation at 128 samples buffer size, equalling a total roundtrip latency of 392 samples. Remember, this is at 196 channels playback plus 194 channels recording at 48 kHz sample rate with a 1.4 kg (3 pounds) laptop! And lots of CPU free to use! 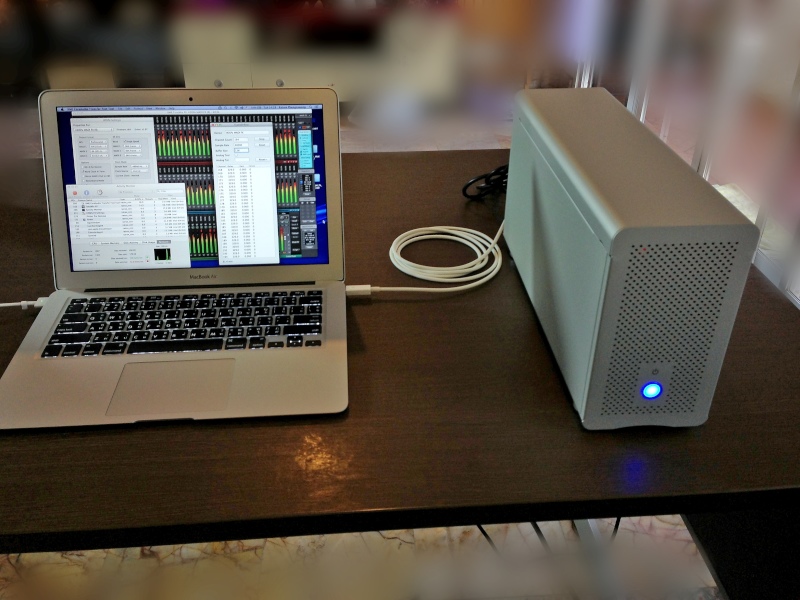 At such numbers there is not much scaling, reducing the channel count to 64 channels I/O I could reduce the buffer size to 64 samples, but had a click here and then. Please note that this performance is the laptop, not the chassis. Connecting the chassis to the same Mac that we used in Frankfurt would have gotten the same astonishing 24 samples value for sure.

I was curious how all this would work under Windows. So I bootcamped the MacBook into Windows 7. Apple did not enable Plug and Play for Thunderbolt there, so the chassis needs to be ready when booting. Removing the TB cable while Windows ran did not remove the devices from Device Manager, and re-plugging couldn't bring the MADI FX into action, reboot needed. At least it did not BSOD. The whole issue is no biggie, with so much CPU power and SSD rebooting Windows on this machine is fast anyway. 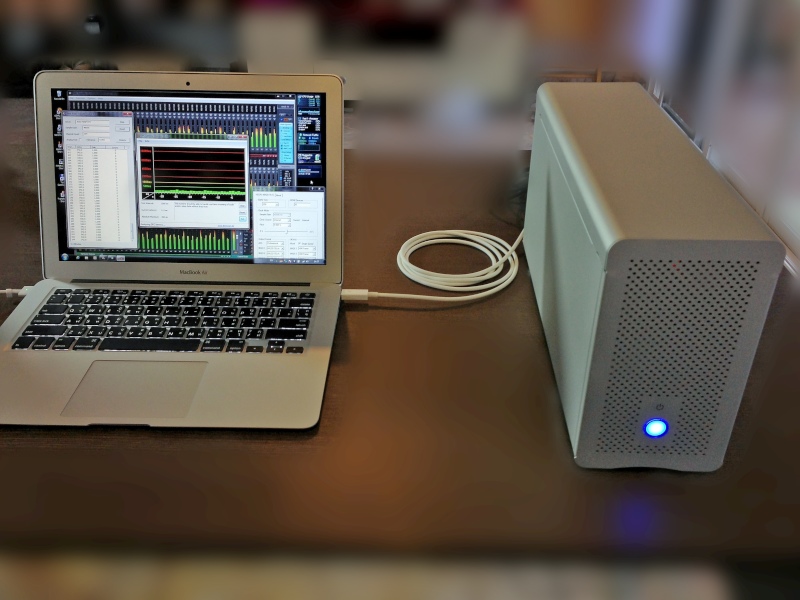 In Windows I could not only use our test tool, but also the DPC Latency Checker. The values that you see on the photo made my Dell Studio laptop perform Harakiri...yes, I really hate their BIOS programmers...

So with perfect DPC values and the very good results under Mac OS X - how is the performance under Windows 7? Not as good as under Mac OS X, but still ok for such a system. Lowest buffer size for all channels at 48 kHz was 512, equalling a roundtrip latency of 1054 samples, which is nearly three times the OS X value. But Windows performance scaled to the channel count. At 64 channels I/O it ran stable at 256, equalling 542 samples roundtrip (still higher than OS X). Neither CPU load nor DPCs were a problem, so this limit in peformance must come from internal data handling, for example the buffering from TB to PCIe, or the internal BIOS, or the special drivers provided via Bootcamp. Most probably we'll never know or find out, because the next laptop model is already around the corner...

Sorry for this review of the Netstor TB to PCIe chassis drifting into a MacBook Air practical experience report, but that just shows that the Netstor never failed for me so far, and silently just did what you expect - it worked. 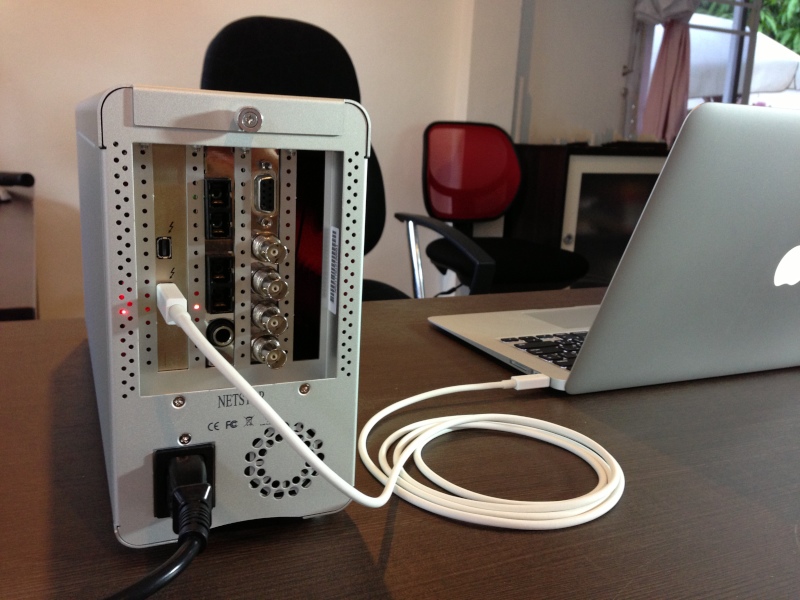 Thanks for the write-up.

How audible is the smallish fan on the chassis?

It is, especially on the desktop beside you, but not much. Was ok for me, but if too much for others they might simply remove its power. Not needed anyway with our cards as they don't draw much current. For example the HDSPe MADI FX consumes a total of 6 Watts. This chassis is obviously designed to handle graphics cards etc. that draw 50 Watts up...then you will need the fan...

Netstor have sent me this additional information concerning the fan:

Yep, I now removed the fan completely, as they say by just pulling it out to the top. Really not needed with our cards and saves a bit weight too. Now the only noise comes from the back ps fan, which is really quite.

Whats the deal with the second card of my Raydat in one of these boxes?

By which I mean, the card takes up an extra slot but obviously doesn't require the 'socket/connection'

Does that make sense?

So buying a 3 slot chassis feels like a bit of a waste when I only really need the connections for 2 cards [i have a UAD as well].

Is there a chassis you know of which would accommodate the Raydat card in that way?

Changing from 3 to 2 slots doesn't change the prize (if so it is a political/marketing decision). Therefore just use the 3 slot model.

My desktop is starting to creak a little bit and I have a 2011 13 inch MacBook Pro.

I guess I could go the  NA211TB route and upgrade the PCI card to PCIe.

I'd also have to deal with USB limitations by getting a big USB hub. I'd also need to put my 2TB hard disk (samples and general storage) into a TB chassis. Possibly I'd also need to consider moving to a new Apple monitor. Maybe wait for the new ones with improved TB hubs (with USB3?).

Then later on, I'd consider a more powerful MacBook or even one of the new Mac Pros when they arrive.

...or I could just update the motherboard, CPU and RAM in my desktop for around £1000.

Anyone have thoughts on whether or not the price of boxes like the Netstor will drop in price? Seen any good prices here in the UK?

Quick question: has HDSPe been tested on this unit?

Yup, says it's been tested on the Netstor site.